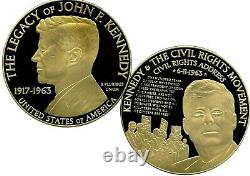 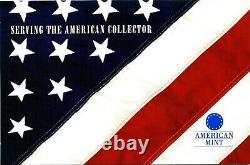 Cu, layered in 24k gold. Today, we are commuted to a worldwide struggle to promote and protect the rights of all who wish to be free. Kennedy On June 6, 1963. President Kennedy presented a nationally televised speech in response to the U. National Guard being sent to protect Vivian Malone and James Hood.

Two African-American students enrolling at the University of Alabama. In this now historic address, he urged the nation to take action toward guaranteeing equal treatment of every American regardless of race. Soon after, Kennedy proposed that Congress consider civil rights legislation that would address voting rights, public accommodations. School desegregation, nondiscrimination in federally assisted programs, and more. Kennedy's proposal culminated in the Civil Rights Act of 1964.

Signed into law by President Lyndon Johnson on July 2, 1964 - less than a year after. The act outlawed all discriminatory employment practices based on sex or race and ended segregation in public places such as swimming pools, libraries, and public schools. This item is in the category "Coins & Paper Money\Coins: US\Collections, Lots".2013" and is located in this country: US.