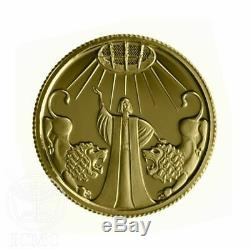 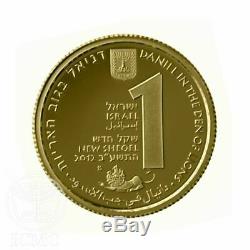 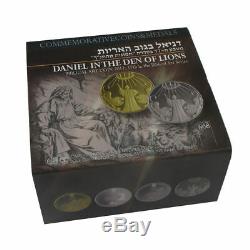 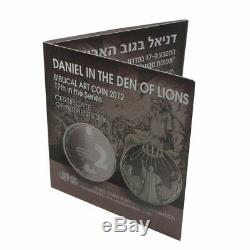 Israel 2012 Daniel in the Den of Lions Smallest Gold Coin Commemorative. And be the first to know about New Arrivals and Upcoming Deals! The biblical story of Daniel is an amazing story of faith, loyalty and heroism.

Daniel was a handsome, intelligent boy of royal descent, who was exiled from his home in the Land of Israel, his country of birth, before the destruction of the First Temple in Jerusalem in 586 BCE. He grew up in the palace of King Nebuchadnezzar of Babylon, became a favorite of the King and later, the interpreter of the King's dreams. For this, he was appointed head of the King's wise men and the Kingdom of Babylon. When Nebuchadnezzar died, his son Belshazar inherited the throne.

One night, Belshazar made a great banquet for a thousand people (Book of Daniel, Chapter 5). After having drunk much wine, he requested that the vessels of the Temple in Jerusalem taken by his father, be brought out and used.

At that very moment, a hidden hand began to write words on the wall. Nobody was able to interpret the meaning of the words except Daniel. Solely Daniel was able to read and explain the significance of the writing on the wall: The words "Mene Mene Teqel Ufarsin" predicted the fall of the Babylonian Empire and its subsequent conquest by Persia and Modai. That very night, Belshazzar was killed and Darius the Mede succeeded to the throne. Darius, like his predecessors, appointed Daniel as Head of his Counselors and in sole charge of the empire.

At this time, out of sheer envy, Daniel's rivals sought his downfall. A decree was initiated by the King's Counselors with the King's agreement, forbidding orders to be given by any person except the King, for thirty days. Any person not obeying this decree would be thrown into the lions' den.

When Daniel remained faithful to God and continued praying to Him three times daily, his rivals spoke slander of him before the King. Despite his affection for Daniel, the King now had no choice but to have him thrown into the lions' den. That night, the King could not sleep and at the crack of dawn, he precipitated to the lions' den to see what had become of Daniel. To the relief and joy of the King, Daniel, rewarded by God for his faith and loyalty, was there in the den, untouched by the fierce lions. The King admired the God of Daniel and decreed that He was to be revered.

He ordered that Daniel's rivals be thrown into the den, upon which. They were instantly devoured by the lions. Daniel continued to serve as executive officer to Darius the Mede and later, Cyrus, King of Persia. Face value, "Israel" in English, Hebrew and Arabic, mint year, Israel State Emblem and a hungry, roaring lion. Daniel in the lions' den, praying to the Lord, flanked but unharmed by two fierce lions. We do our best to ensure that ordersarrive as quickly as possible. Each package is fully insured. Pictures of products are for illustrative purposes only. VAT will be added to orders received from customers in Israel. The product must be in its original box and original perfect condition. Applicable in the case of products other than Gold and Silver Bars, Rounds, Bullions, Coins and Medals. From the date on which it was received.

The Holy Land Mint - Israel Coins & Medals Corp. Israel Coins and Medals Corp. Was established in 1958 by then Prime Minister Ben Gurion for the purpose of commemorating the historical events and milestones of the State of Israel, as well as its outstanding personalities and achievements in culture, science and art. Until 2008, the Corporation was fully owned by the Government of Israel. During 2008, it was privatized.

Today, Israel Coins & Medals Corp. Is recognized internationally as "The Holy Land Mint". Throughout the years, from its inception until the present, the Corporation has strictly maintained its original character and values, just as Ben Gurion had envisioned.

Powered by Valigara Jewelry Manager. The item "Israel 2012 Daniel in the Den of Lions Smallest Gold Coin Commemorative" is in sale since Friday, June 17, 2016. This item is in the category "Coins & Paper Money\Bullion\Gold\Coins". The seller is "holylandmint" and is located in Nesher.