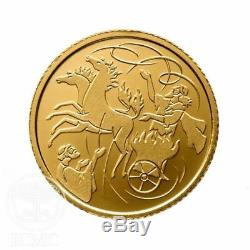 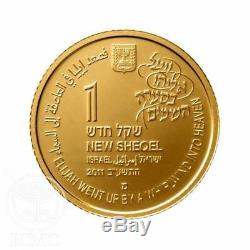 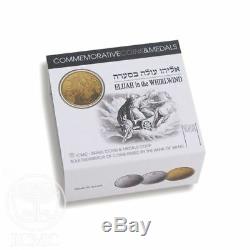 Israel 2011 Elijah in the Whirlwind Smallest Gold Coin Commemorative. And be the first to know about New Arrivals and Upcoming Deals!

Elijah the Prophet, about whom we are told in the Book of Kings I and II, ascends to heaven in the whirlwind, in a chariot of fire drawn by horses of fire. This is one of the most famous Biblical scenes, which has been an inspiration for artists throughout the ages. Elijah was weary of his relentless and unsuccessful efforts to correct the ways of the people. He understood that his role as a prophet was destined to end; He was to leave this world and Elisha, his disciple, was to take over his mission. Elisha refuses to accept that his beloved master was to leave him and the moving parting between Elisha and Elijah is an integral part of the dramatic scene.

As Elijah and Elisha walked and talked together behold, there appeared a chariot of fire, and horses of fire, and parted them from one another, and Elijah went up by a whirlwind into heaven. And Elisha saw it, and he cried My Father, My Father.

And he saw him no more and he took hold of his own clothes, and rent them in two pieces. He took up also the mantle of Elijah that had fallen from him. Elijah had not died but he had been taken up to heaven, to reappear as a harbinger of the Messiah to come. The artist Yaacov Enyedi has created a dramatic rendering of the Biblical scene for the Biblical Art Coin 2011. Face value, "Israel" in English, Hebrew and Arabic, biblical inscription in English and Arabic around the border, and upper right, in Hebrew in artistic letters resembling flames within the whirlwind.

Top center, Israel State Emblem. Elijah going up to heaven in a chariot of fire drawn by horses of fire. Below left is Elisha, who is to take over Elijah's prophetic role, shocked by the parting of Elijah. We do our best to ensure that ordersarrive as quickly as possible. Each package is fully insured.

Pictures of products are for illustrative purposes only. VAT will be added to orders received from customers in Israel. The product must be in its original box and original perfect condition.

Applicable in the case of products other than Gold and Silver Bars, Rounds, Bullions, Coins and Medals. From the date on which it was received.

Was established in 1958 by then Prime Minister Ben Gurion for the purpose of commemorating the historical events and milestones of the State of Israel, as well as its outstanding personalities and achievements in culture, science and art. Until 2008, the Corporation was fully owned by the Government of Israel. During 2008, it was privatized. Today, Israel Coins & Medals Corp.

Is recognized internationally as "The Holy Land Mint". Throughout the years, from its inception until the present, the Corporation has strictly maintained its original character and values, just as Ben Gurion had envisioned. Powered by Valigara Jewelry Manager.

The item "Israel 2011 Elijah in the Whirlwind Smallest Gold Coin Commemorative" is in sale since Monday, June 20, 2016. This item is in the category "Coins & Paper Money\Coins\ World\Middle East\Israel". The seller is "holylandmint" and is located in Nesher. This item can be shipped worldwide.