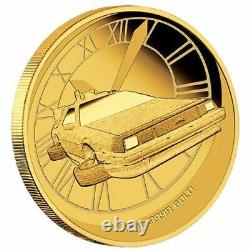 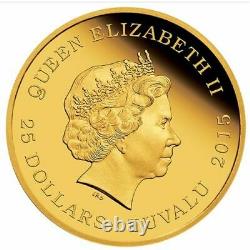 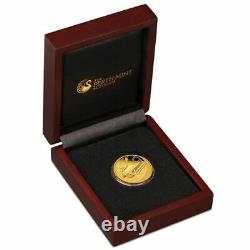 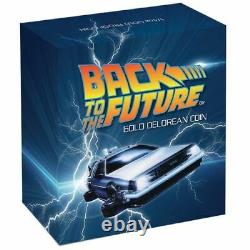 Issued as legal tender under the authority of the Government of Tuvalu, the Ian Rank-Broadley effigy of Her Majesty Queen Elizabeth II, the monetary denomination, and the 2015 year-date are shown on the coins obverse. No more than 1,000 of the Back to the Future 2015 1/4oz Gold Coin will be released. Presentation Packaging and Numbered Certificate. Each coin is individually presented in a wooden display case within an illustrated shipper and is accompanied by a numbered Certificate of Authenticity. Written by Bob Gale and Robert Zemeckis, Back to the Future became the most successful film of 1985, receiving widespread critical acclaim.

Its success led to the release of two sequels in 1989 and 1990, and a variety of other spinoff projects, including an animated series, a theme park ride, video games, and a musical. The film follows Marty McFly as he is blasted back in time to 1955 in the DeLorean time machine where he meets his parents who were in high school, but had not yet fallen in love. In the present day, 1985, Martys family members are largely unhappy and unsatisfied with how their lives have turned out. When Marty travels back to 1955, he unintentionally interrupts his parents first meeting, altering the course of the future. Marty must make sure his parents fall in love all over again in order to ensure his own existence and to get back to the future.