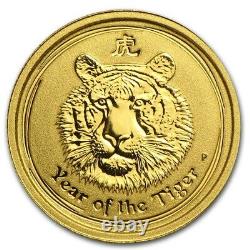 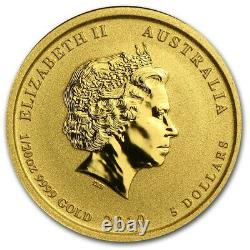 EXTREMELY HARD TO FIND, this fractional Year of the Tiger pure gold stunner offers a beautiful and economical way to own. Observing the fearsome carnivore that is the tiger, whether in nature or in a zoological park, we mere humans can't help but be awestruck by the size, strength, and elegance of this majestic creature. Is easily one of the most intriguing, most beautiful, and most endangered great animals in the world. It is also one of the two most auspicious animals on the Chinese lunar calendar (the other being the Dragon), a feline made all the more desirable by the Perth Mint's execution in 4 9s pure gold, artistically rendered in what the Perth Mint refers to as its "specimen" or "bullion" finish, which we would call a reverse proof finish, with frosted fields and mirrored devices.

Even better is the price! Leave it to the Perth Mint to make the luxury of a. 9999 fine gold coin affordable for everyone! The Year of the Tiger. Centuries ago, the Chinese invented a calendar based on the lunar (rather than the solar) cycle.

There are twelve animals in the Chinese lunar zodiac, each corresponding in sequence to a year rather than a month. In 2010 we celebrate the Year of the Tiger. According to tradition, people born during a Year of the Tiger (1914, 1926, 1938, 1950, 1962, 1974, 1986, 1998, 2010 and 2022) are said to exhibit that animals attributes. They are charismatic and fearsome, generous but unpredictable. They are often noted for their enthusiasm in life, and are unafraid of exploring new territory.

They can also be aggressive, especially when they perceive a threat or are cornered. This artistically-rendered beauty contains a full one-twentieth troy ounce of four nines. Its weight represents a most popular fractional size of gold, small enough to be economical for any collector. The marvelous minting and refining technologies of the Perth Mint have brought us this affordable gold coin, in a purity (99.99%) that puts other, larger gold coins to shame! A meticulously rendered, close up view of a noble and handsome tiger's face.

The Chinese character for "Tiger" appears above, while below the legend YEAR OF THE TIGER defines the theme. The Perth Mint "P" mint mark appears along the rim in the 4:00 position. Her Majesty, Queen Elizabeth II, in crowned profile facing right. This portrait, featuring Her Majesty wearing a tiara and pearl earrings, was executed by the sculptor Ian Rank-Broadley.

The legend 1/20 OZ 9999 GOLD guarantees the weight and purity. The legends ELIZABETH II, AUSTRALIA and the denomination also appear.

Each coin is enclosed in its original Perth Mint capsule of issue, protected by an outer 2x2 mylar cardboard holder. Reverse Proof (Specimen or Bullion).

This item is in the category "Coins & Paper Money\Bullion\Gold\Coins". The seller is "talismancoins" and is located in Saint Louis, Missouri.