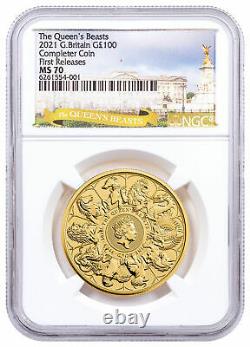 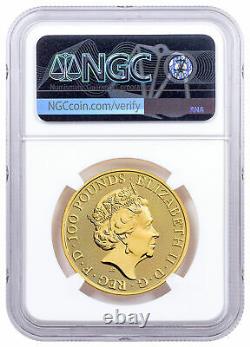 Whether you have collected the entire Queen's Beasts Series or you are looking for a stunning standalone issue, this coin is a great option. This release celebrates the conclusion of a brief yet distinguished series that has been a favorite among collectors for its few short years. Each previous release in the series featured one of the ten creatures that attended, in stone form, Queen Elizabeth II's coronation, while this coin features all of those creatures. This issue was struck on a 1 oz planchet of.

This piece is a product of The Royal Mint. This piece pays homage to the conclusion of the Queen's Beasts series.

Obverse: The obverse features a right-side portrait of the longest reigning monarch in British history, Queen Elizabeth II. The monarch, which was designed by Jody Clark, shows her wearing her Royal Diamond Diadem. Along the rim are inscriptions of the featured monarch's name and abbreviated title, "ELIZABETH II D G REG F D, " and the coin's face value, 100 POUNDS. Reverse: Clark also designed the reverse. The same portrait that is on the obverse is at the center of the reverse. It is encircled by the ten beasts that each had their own issue in the series. Between the queen and her beasts is a frame that bears inscriptions of the name of the series, "THE QUEEN'S BEASTS, " the coin's weight and purity, "1 OZ FINE GOLD 999.9, " and its date, 2021.

Perfect MS70 ER with Queen's Beast Label. Numismatic Guaranty Corporation (NGC) printed this coin's grading information on a Queen's Beasts label. That information includes the company's highest grade, Mint State 70 (MS70), and Early Releases (ER) certification. The MS70 grade means that the coin appears perfect even under 5x magnification, while the ER designation indicates that it was submitted for grading no more than a month after its initial release from the mint.

We cannot make any price adjustments after the sale is complete. Product Photo Policy: MCM attempts to display product images shown on the site as accurately as possible. We take all of our photos in house and due to reflections on the mirrored or proof surfaces of a coin there may appear to be'black' when there is not.

If a coin has a color on it at all it will be described as'colorized' in the description or title. Due to the large inventory we sell, we use stock photos. Serial numbers will vary from the image shown unless specifically stated in the product listing that the item pictured is the item you will receive.

INTERNATIONAL ORDERS POLICY: We are accepting international orders from select countries. These charges are the customer's responsibility. However, we cannot guarantee this due to the volume of orders we process each day.

Beyond the 30-day return period, Company is under no obligation to accept return of any product, but may in its discretion do so pursuant to this policy, for up to one year from the invoice date. ModernCoinMart (MCM) was launched in 2004 and quickly set the standards for online sales of bullion, US coins and world coins.

Join over 100,000 loyal customers and feel confident purchasing from a company that's spent a decade building a solid and stellar reputation trusted and recognized around the world. That's the MCM way.

This listing is currently undergoing maintenance, we apologise for any inconvenience caused. The item "2021 Great Britain 1 oz Gold Queen's Beasts Completer £100 Coin NGC MS70 FR" is in sale since Monday, July 12, 2021. This item is in the category "Coins & Paper Money\Coins\ World\Europe\UK (Great Britain)\Commemorative". The seller is "mcm" and is located in Sarasota, Florida. This item can be shipped worldwide.