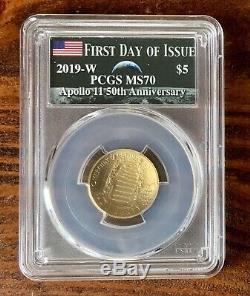 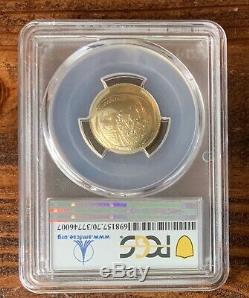 Certified PCGS MS70 - FIRST DAY OF ISSUE - PCGS Lunar Label. THIS IS THE EXACT COIN YOU WILL RECEIVE.

A FRESHLY GRADED AND PERFECT 70 FIRST DAY OF ISSUE GOLD COIN. The United States Mint certifies that this coin is a genuine 2019 Apollo 11 50th Anniversary Commemorative, struck in accordance with legislation passed by Congress and signed by the President as Public Law 114-282. This coin was produced by the Department of the Treasury, United States Mint to commemorate the 50th Anniversary of the first manned landing on the Moon. The obverse (heads side) design features the inscriptions MERCURY, GEMINI and APOLLO, separated by the phases of the Moon, and a footprint on the lunar surface, which together represent the efforts of the United States space program leading up to the first manned Moon landing. Other inscriptions include 2019, IN GOD WE TRUST and LIBERTY. The reverse (tails) design features a representation of a close-up of the famous Buzz Aldrin on the Moon photograph taken July 20, 1969, that shows just the visor and part of the helmet of astronaut Buzz Aldrin. The reflection in Buzz Aldrin's helmet includes astronaut Neil Armstrong, the United States flag and the lunar lander. Inscriptions include UNITED STATES OF AMERICA, FIVE DOLLARS and E PLURIBUS UNUM. Grade MS70 FIRST DAY OF ISSUE. Actual Metal Content 0.2419 troy oz. Composition 90% Gold, 6% Silver, Balance Copper. The item "2019-W $5 Gold MS70 Apollo 11 50th Anniversary Coin PCGS FIRST DAY Of ISSUE" is in sale since Sunday, September 1, 2019.

This item is in the category "Coins & Paper Money\Coins\ US\Commemorative\Modern Gold (1984-Now)". The seller is "tw9295" and is located in Danville, Illinois.