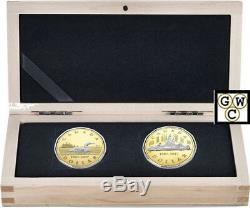 The now-ubiquitous image of a loon looms large in Canadian iconography, but it wasn't the design intended for the coinhad the original dies not vanished in transit, the silver dollars Voyageur image would appear where the loon roosts today. The first coin features the design by Canadian artist Robert-Ralph Carmichael that has become synonymous with Canadas currency: the iconic side-profile portrait of a common loon on a still lake.

Here, the application of selective platinum plating shines the spotlight on the distinctive waterfowl, as it floats past the conifers rising up on a small island in the left-side background. The obverse features selective platinum plating on the rim and on the effigy of Her Majesty Queen Elizabeth II by Susanna Blunt. The second coin represents the one-dollar circulation coin that never was. Largely unchanged from the design that appeared on Canadian silver dollars from 1935 to 1986, the Voyageur image by sculptor and artist Emanuel Hahn is a powerful nod to Canadas early history and its reputation as an untamed frontier during the fur trade era. Selective platinum plating adds to the engraved scene in the centre of the reverse, where a canoe moves swiftly past the wind-swept pines that dot a semi-circular island.

A voyageur paddles at the stern, while an Aboriginal paddles at the bow; between them, a bundle of wrapped furs are marked HB for Hudsons Bay Company, while stylized vertical rays above represent the aurora borealis lighting up the sky. The obverse features platinum plating along the coins rim and on the effigy of Her Majesty Queen Elizabeth II by Susanna Blunt. Not one, but two pieces of history are yours to collect, as one of Canadas most iconic circulations coins celebrates its 30th anniversary! An exclusive collecting opportunity: A 99.99% pure gold loonie showcased side-by-side with the Voyageur design that was intended to appear on the coina unique comparison of what is next to what could have been Canadas one-dollar circulation coin! Both designs are enhanced by the selective application of magnificent platinum plating on both the obverse and the reverse.

No detail was spared: both coins share the same distinctive shape and outline as the 11-sided circulation coin! An outstanding example of craftsmanship thanks to precision engraving, the careful use of finishing techniques, and the striking effect created by the platinum plated elements against the coins surface. Composition: 99.99% pure gold.