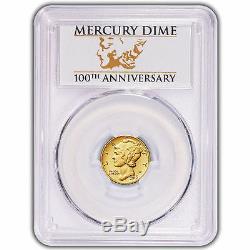 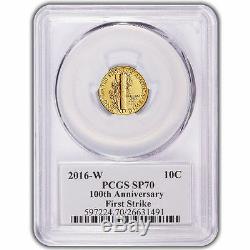 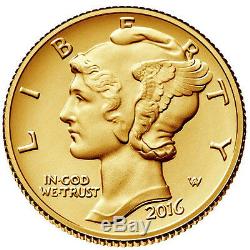 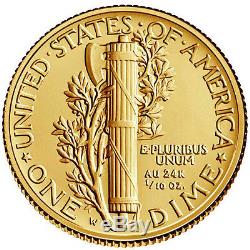 Up for your consideration is this 2016-W PCGS SP70 FS 1/10 ounce. 9999 (24k) gold Mercury dime coin. THESE VERY LIMITED GOLD COINS (ONLY 125,000 MINTED) SO GET YOURS NOW WHILE THEY ARE STILL AVAILABLE! To celebrate the 100th Anniversary of some of the United States Mint's greatest coin designs ever, the mint will release a total of three commemorative gold coins in 2016 that first appeared in 1916. 1st release from the 2016 Gold Commemorative coin series. Arrives in a protective plastic slab. Contains 1/10 troy ounce of. 10 (USD) backed by the federal government. Issued a grade of SP70 (Specimen Proof) from the Professional Coin Grading Service. Designated as a First Strike coin. Includes the "W" mint mark of the West Point Mint. Reverse bears the Roman faces design from the Mercury Dime.

The original design of Liberty depicted her beauty in left-profile relief wearing a winged cap. Known officially as Winged Liberty, it was often referred to as the Mercury Dime upon its release because Liberty's cap reminded Americans of the Roman god Mercury and his winged cap.

The 2016 1/10 ounce American Gold Mercury Dime coin in this listing is a perfect specimen, with an SP70 grade from the PCGS. Coins of this type have full, original mint luster and lack any detracting flaws. The First Strike designation identifies these coins are products that arrived at the PCGS for grading within the first 30 days of the US Mint's release date. Thank you very much for looking at our listings! The item "2016-W PCGS SP70 FS 1/10 oz.