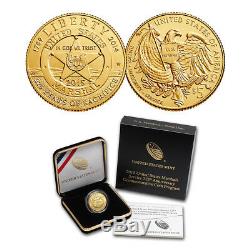 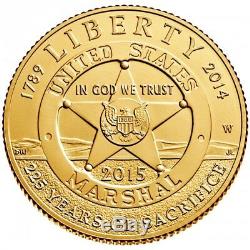 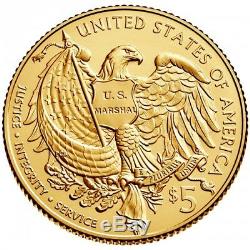 Marshals 225 Year Anniversary Gold Coin from the U. Mint is perfect for coin collecting, investing, or just owning a symbol of American history.

The theme of the U. It represents the more than 250 Marshals who have lost their lives in the line of duty. From 1794, when the first Marshals were killed in the line of duty, to those who have made the ultimate sacrifice more recently, this coin honors every life lost in the pursuit of justice.

The obverse (heads) depicts the U. Marshals Service star superimposed on a mountain range, evoking a western landscape. Inscriptions are 1789, LIBERTY, 2014, UNITED STATES, IN GOD WE TRUST, 2015, MARSHAL and 225 YEARS OF SACRIFICE. The reverse (tails) depicts an eagle holding a draped American flag. On the eagles chest is a shield with the inscription U. A banner in the eagles claw bears the inscription E PLURIBUS UNUM. More than just a coin, the U. The United States Marshals Service is the nations oldest federal law enforcement agency, having served our nation since 1789. Ensuring liberty and justice for our infant nation, the U. Marshals Service was formed when President George Washington signed the Judiciary Act into law in 1789. With a history woven around our Constitution, the U. Marshals Service continues, 225 years later, with the same principles of justice, integrity and service.