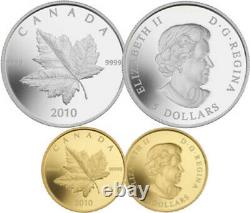 PIEDFORT SET OF 1/5 OZ PURE GOLD AND 1 OZ PURE SILVER - MAPLE LEAF (2010) Piedfort - A coin of substance The word piedfort literally means strong foot in French and appeared centuries ago to mean heavy measure in minting. Today, piedfort indicates that a coin is thicker than usual. The Royal Canadian Mint is proud to introduce its first-ever piedfort Gold Maple Leaf and Silver Maple Leaf Coins, inspired by the strong and enduring interest in its internationally-renowned bullion products. Gold Maple Leaf Coins were originally launched in 1979.

They were the first 99.99percent pure gold coins available in the world and quickly became the standard by which other bullion coins are measured. Within decades, the Mint pushed its purity standard to the next level by introducing the worlds first 99.999percent Gold Maple Leaf Coins in 2007. Silver Maple Leaf Coins were originally launched in 1988. They quickly benefitted from the success of the Gold Maple Leaf Coins introduced nine years prior to become the standard by which other silver bullion coins are measured.