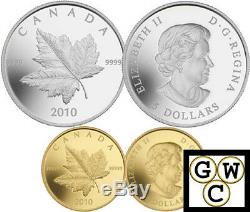 PIEDFORT SET OF 1/5 OZ PURE GOLD AND 1 OZ PURE SILVER - MAPLE LEAF (2010). Piedfort - A coin of substance. The word piedfort literally means strong foot in French and appeared centuries ago to mean heavy measure in minting. Today, piedfort indicates that a coin is thicker than usual.

Silver Maple Leaf Coins were originally launched in 1988. They quickly benefitted from the success of the Gold Maple Leaf Coins introduced nine years prior to become the standard by which other silver bullion coins are measured. These new piedfort coins are crafted on that same tradition of excellence.

Diameter (mm): 16 (gold); 34 (silver). Coins are encapsulated and presented in a maroon clamshell case lined with flock and protected by a black sleeve. Customers located in MANITOBA, CANADA!!!! Please DO NOT hit pay it now until a revised invoice can be generated and sent to you.