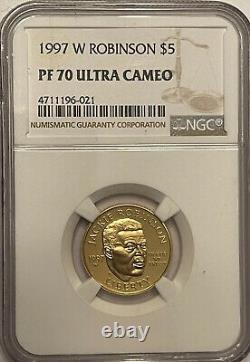 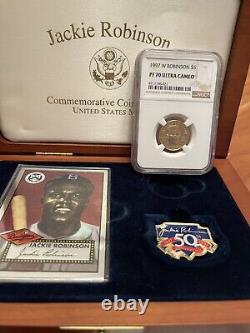 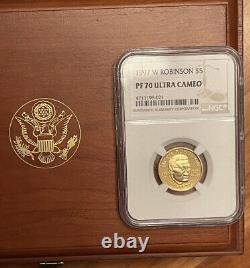 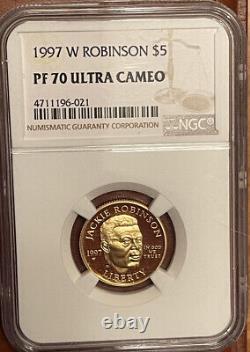 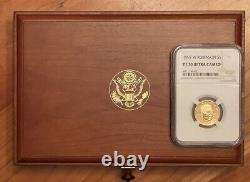 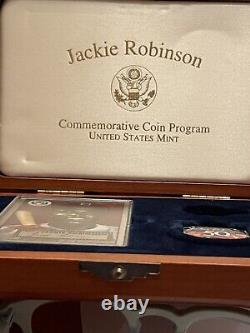 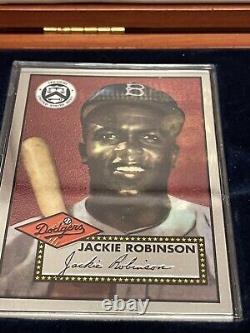 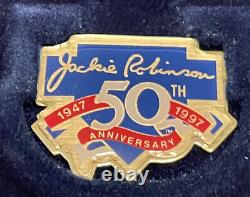 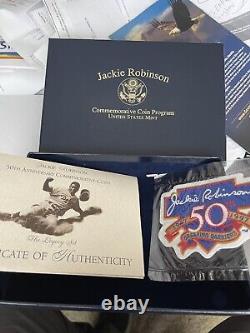 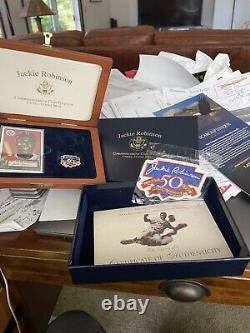 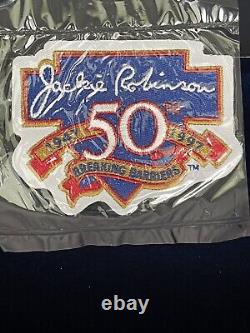 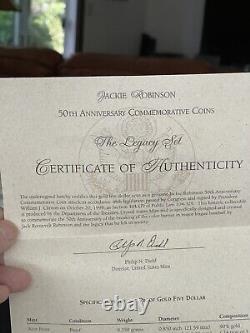 1997 -W Jackie Robinson - Wooden Presentation Case, Card And Pin NGC PF70. For decades professional sports were strictly segregated in the USA, with African-American baseball players having their own Negro League.

It was not until 1947 that this color barrier was broken, when Jackie Robinson was signed to play for the Brooklyn Dodgers. Despite sometimes viscous harassment of both him and the team that lasted for the next few years, Robinson bravely stepped out to the field time after time, leading the way for players of all races to participate equally in professional sports.

1997 marked the 50th anniversary of this event, and it was celebrated with the authorization of up to 200,000 silver dollars and 100,000 gold half eagles. The obverse of the silver dollar features a facing view of Jackie Robinson kicking up a cloud of dirt as he slides into home plate, a scene inspired by an actual moment during the 1955 World Series against the New York Yankees. The date of coining is below, while the mintmark appears to the right. Statutory mottoes complete this side.

Dominating the reverse is the Jackie Robinson Foundation's 50th anniversary logo. It features the commemorative dates, Robinson's signature within a chevron and the inscription BREAKING BARRIERS. " Surrounding this logo is text denoting two highlights of Robinson's career: "ROOKIE OF THE YEAR 1947? Statutory legends complete this side of the coin, which was sculpted by the U. The five-dollar gold piece features on its obverse a three-quarter facing bust of Jackie Robinson by William Cousins of the U.

Mint, whose initials are seen below. Above the bust is "JACKIE ROBINSON, " while the date of coining is at left, with the mintmark below it. The usual mottoes required by law balance these various elements. The central device on the reverse of this handsome coin is, not surprisingly, a baseball. Written across it are Robinson's lifespan, "1919 - 1972" and Legacy of Courage.

The initials of the designer and the sculptor are seen along the edge of the baseball at four o'clock. The remaining statutory legends complete this reverse. Both the uncirculated and proof versions of the silver dollar were coined at San Francisco, while West Point produced the gold half eagles. As with most commemoratives of the 1990s, there were various packaged sets offered by the Mint, including a Legacy Set which featured the half eagle along with a baseball card and a commemorative pin. Despite the popularity of baseball with Americans, sales of these coins were shockingly low.

There were several commemorative programs against which the Robinson coins competed that year, yet none faired so poorly with collectors. Those few who did order these coins, particularly the uncirculated editions, acquired some of the rarest issues within the modern series. This item is in the category "Coins & Paper Money\Bullion\Gold\Coins". The seller is "sparechange2" and is located in this country: US. This item can be shipped to United States.